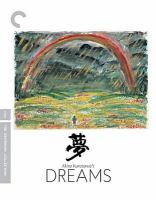 Beautiful late film from the Japanese master Akira Kurosawa. He would make two films after this, but this 1990 film feels like the summation of one of the great careers in cinema. Yet despite the elegiac quality, it doesn't feel like the film of an old man in the sense the Kurosawa is embracing new techniques and working with color (which he came late to) in striking and unexpected ways. As the title indicates, this film is made up of dreams, which the director claimed he all had. Martin Scorsese plays Van Gogh in one episode. The documentary featuring other directors (Scorsese, Miyazaki, Clint Eastwood) paying tribute is worth watching.

Wonder if Kurosawa day-dreamed instead of REM-dreamed the colorful tales --- hard to imagine anyone dreamed of 10ppm of plutonium-239, or about strontium-90 and cesium-137. Best visual is the second dream "Peach Orchard" with its hina dolls. For in-dept review, read an essay from Criterion in "Summary."

A cautionary message to humanity runs through the eight dreams, which seem to be autobiographical. They start with the imagination of a young child, then war and nuclear catastrophe, the birth of a passion for capturing images as represented by Van Gogh, and finally with the wisdom of an old man who has come to terms with death. In the final dream set in a tranquil village among gently churning water wheels, the old man speaks for Kurosawa as he talks about living a simple life connected to nature while working on an old water wheel. The circle of life? The movie requires patience as scenes unfold slowly. Visual and audio highlights are stunning: the joyous funeral procession, the peach trees unfurling, the walk through Van Gogh’s paintings, the howling agony of the horned demons, the fox wedding. The interviews with film directors influenced by Kurosawa are also worth watching.

Its an unusual film in that its a sequence of short films not related to each other by, say, character or setting: its film as a form of thought on a something Big (like what Tolstoy's Master and Man is in literature). Discerning the Big Idea - discovering it for oneself - is the very pleasure in watching it. (Otherwise, its only the first two in the series that I liked.)

Of the 8 vignettes - I fast forwarded through 1-4; 5-8 were better but nothing special.

Legendary film director, Akira Kurosawa, released "Dreams" in 1990 as his 28th masterpiece. Visually stunning, the film is a set of eight vignettes depicting the effects of human beings on nature. It is just as relevant today as it was at its release. Recommended by Michele

Moving, magical dream episodes include the forbidden sight of fox spirits' wedding; apocalyptic destruction; and a vibrant, musical dancing procession celebrating life. This is a gorgeous, deep film from a great filmmaker, enriched by the perspective of age.

... Akira Kurosawa’s Dreams, an oddly quiet series of vignettes supposedly based on his own dreams over the years. It was like nothing the director had ever done before. For most of his career, Kurosawa’s cinema had been one of action, his characters men driven to extremes who find meaning and nobility in their efforts, even as the world collapses around them. Now, the director seemed to bid farewell to all that in a gentler film, purposefully devoid of dramatic conflict. ...

There are no ages for this title yet.

There are no notices for this title yet.

There are no quotes for this title yet.